By Lykke Ogstrup Lunde28/03/2019No Comments
Facebook Twitter LinkedIn Email
Copenhagen (NordSip) -80-year old investment veteran Jeremy Grantham (pictured) paid a visit to Copenhagen this week. His message on climate was a gloomy one while his message on the investment side was more optimistic. The co-founder of Grantham Mayo van Otterloo (GMO) has rock star status in investment circles for predicting with painful accuracy investment bubbles like the tech bubble and the financial crisis. Now he foretells what climate change will do to your portfolio.

“I hate early mornings and I am jetlagged. With any luck, I will wake up in an hour,” Jeremy Grantham starts, talking to a star-struck audience in the rooms of FinansDanmark, Danish business association for banks, mortgage institutions, asset managers and investment funds.

Grantham was invited to speak by the Danish KR Foundation whose mission it is to address the root causes of climate change and environmental degradation.

It didn’t take long for Grantham though to wake up and bring the audience a sombre message: Market economy could save the planet, but it will not do the job. If humanity as a species is to have any chance of surviving, regulation from strong governments and technological development is where one must turn for hope.

A colleague at Bloomberg wrote that Grantham was famous for predicting gloom and doom. He wasn’t understating the truth.

In his whitepaper – “Race of our lives” Grantham addresses several problems coming at us high speed, making hair stand in the neck of many in the room:

1) Climate change in the shape of rising ocean levels, heavier downpours, rising temperatures, and much more powerful tornadoes and storms. All rooted in the massive amounts of carbon dioxide still emitted into the atmosphere.

2)  Agricultural challenges such as decreasing grain productivity, soil erosion due to increased downpours and the washing out of phosphorus and potassium. Topsoil is disappearing at an increasing rate and we only have about 30-70 good harvest years left depending on where on the planet you are. Rising sea levels will also eat a good part of for example rice producing areas around the river deltas in countries like India, Vietnam and China.

3) Overpopulation of the planet at large, migration and declining fertility in developed countries. Even without climate change it will be almost impossible, Grantham writes in his whitepaper, to feed the 11.2 billion people the UN predicts for 2100.

4) Toxicity and biodiversity. Even if we try to be healthy we are continuously exposed to toxics in the eco system and so are our unborn children and all other species. German studies show a 75 percent decline of insects since 1989.

We are living in an unhealthy version of capitalism, Grantham argues, where profit is put above all other considerations. The mantra of “more, more, more” seems to be what in the end is going to give us less and less. Less places to live, less amounts of food and a limited number of years as a species unless something dramatically is done.

“American capitalism is a bit wonky to use a technical term”, Grantham smirks. “It has lost its drive. There is 50 percent less entrepreneurial spirit in the US than just a couple of decades ago. More dominant monopoly – it’s not healthy. Today the only social responsibility a corporation has is to make more profit”, Grantham says.

“What should I do, you say? You should lobby your government officials – invest in an election and buy some politicians. I am happy to say we do quite a bit of that at the Grantham Foundation – only green politicians. We will vote for any party – any candidate as long as they are green”, Grantham states.

Regarding asset management, we should increase pressure on asset managers, pension funds or any other investors to divest from unsustainable businesses and redirect capital to generate positive impact. For Grantham, that means funding new technologies via venture-like investments. 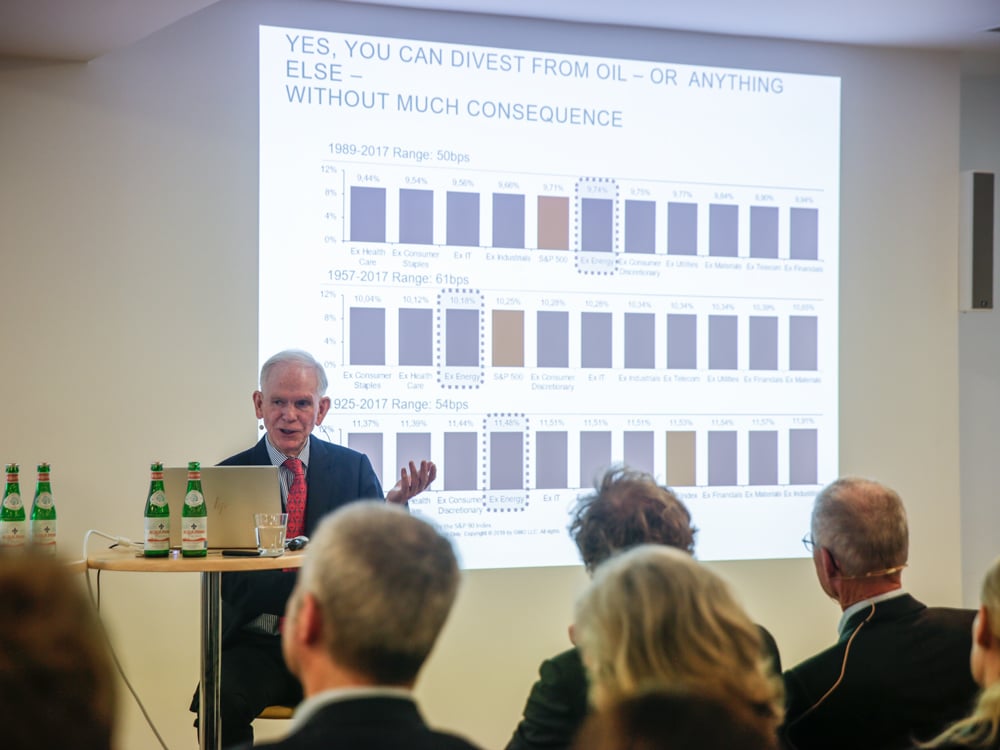 “The argument will be that if you divest out of different groups of assets you lose a competitive edge on returns. But data shows it isn’t so. Yes, you can divest from oil or anything else without it costing you any significant portion of return”, Grantham says. He supports his argument with a set of compelling data showing that divesting from any one sector barely makes a dent in the overall performance. On the contrary owning the wrong stocks may hurt significantly over the next decades.

Grantham sees great investment opportunities into new technologies through venture capital and direct investments. Returning a financial profit while saving the planet is not for the public at large, however. It is an opportunity for institutional investors, large asset managers and family offices.

“The good news is that the technology is dramatically better that what the gloomy lot of environmentalists know. It’s just waiting for more funding and more daring investors,” Grantham says and carries on. “If they would just make me Marcus Aurelius – emperor of the world – we wouldn’t have a problem. I would dispatch funding to thousands of start-ups. I would probably get assassinated by Thursday night…” the ageing asset manager chuckles and has got the audience laughing. Luckily, Grantham’s talk ends less gloomily than it started.